Like its predecessor, the sensor in A7S II has impressive low-light performance — in fact, very impressive high ISO dynamic range, particularly between ISO3200 and 12800. But it comes at the expense of pixel count and the dynamics are not much of an improvement over the A7S, which (along with the $2999 price tag) we suspect will continue to limit the appeal to still photographers. As a camera intended primarily for videographers, however, that may not be much of an issue. Anyone that has invested in the A7 or A7R variants looking for a complementary video-centric model need look no further than the A7S II. 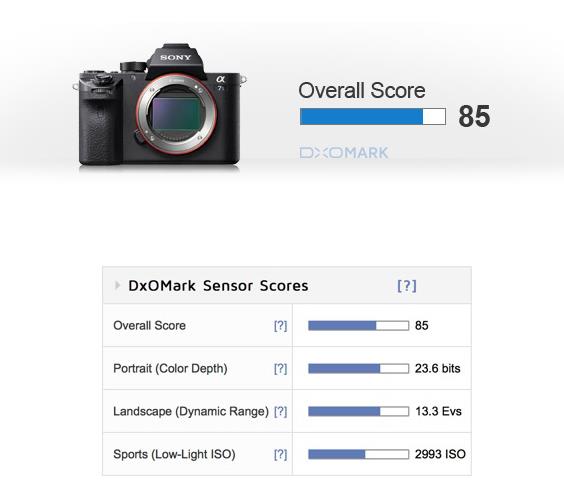 Although the DxOMark score is slightly below the earlier A7S, the difference is pretty much negligible. The A7S II is slightly behind in color sensitivity, equating to just 0.3 bits color depth, which isn’t really perceivable in use. However, the maximum score of 23.6 bits at base through 22.1 bits at ISO400 is considered excellent. Compared to the A7R II, though, color sensitivity is over 2 bits lower at base, which is noticeable, and impressively, that model maintains a significant improvement through ISO6400, at 18.3 bits.

The Sony starts to reveal some advantages when it comes to dynamic range. It can’t compete with the D810 at low ISOs, but it matches the Df and catches up with the D810 from ISO400, after which at ISO3200, the Sony takes the lead. The Nikon Df, however, used to stand out for its low-light, high-ISO capabilities, but now it only matches the A7R II (see above), and is only fractionally above the A7S II. The D810 is another capable camera that offers near-identical performance, which goes to show just how good a camera it is.