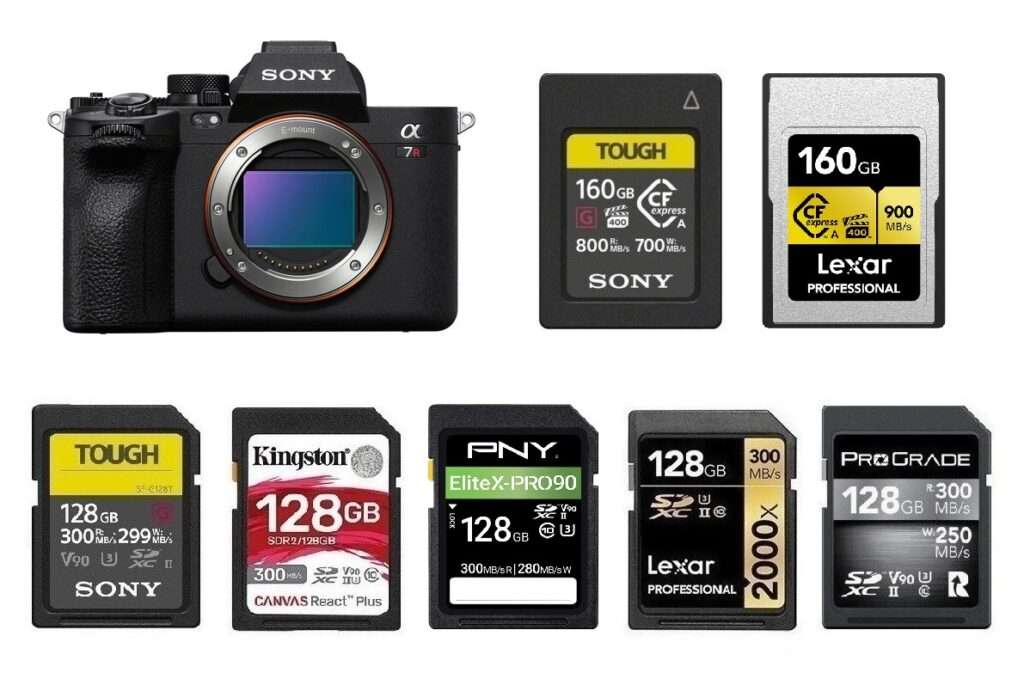 So, in order to get the ultra high read speeds (transfer speed) and write speeds (fast buffer clearing time) to get the best out of your Sony a7R V camera, here we list the top recommended & fastest CFexpress Type A cards and SD cards for the Sony a7R V mirrorless camera based on the speed, reliability and price.

The Sony a7R V supports the ultra-fast CFexpress Type A cards in both card slots. The CFexpress Type-A cards are much more expensive than SD cards, but if you shoot a lot of continuous bursts, you’ll notice that they clear the buffer much faster.

Currently, there are only 5 CFexpress Type A cards on the market. We highly recommend purchasing whichever card is cheaper at the time.

The Sony SF-G Tough UHS-II SD Card (V90) is the fastest and most expensive UHS-II SD cards on the market, and you will never go wrong with it. Aside from that, the ProGrade Digital UHS-II SDXC Card (V90) and the Delkin Devices Power UHS-II SDXC Card (V90) are two of the most well-liked SD cards on the market that can be purchased for a reasonable price. If you are looking for some UHS-II SD cards that don’t break the bank but yet provide speed and dependability, these two cards are an excellent option for you to consider. If you are on a tight budget, you may also want to have a look at the Sony SF-M Tough UHS-II SD Card (V60) and the ProGrade Digital UHS-II SD Card (V60).

Here are some suggestions for card readers to consider purchasing if you do not already own a CFexpress Type-A or UHS-II SD card reader.

That’s all the recommendation list. Hope this buying guide can help you get the the best out of your Sony a7R V mirrorless camera.

With a 61MP full-frame sensor, the BIONZ XR image processing engine, AI-powered autofocus, 8K video and a flexible new LCD monitor, the Sony a7R V is an ideal camera for shooting nature, portrait, wedding, wildlife and even sports. Just get it at Amazon, B&H, Adorama.