Camera Memory Speed has competed their test of CF card and SD card speed comparison on 50MP Canon EOS 5Ds DSLR camera. It is clear from the test results that most CF cards is much faster than SD cards on Canon EOS 5Ds ($3,699 at Amazon | B&H | Adorama).

The 5Ds is mounted on a tripod and a remote timer is used for 30 second shooting intervals. A manual lens is used and focused using live view at maximum magnification. The subject is a static test scene under controlled lighting.

A comparison of different test subjects was conducted with the the Canon 5Ds. Using the Lexar Professional 1066x 128GB CF card, the most detailed scene resulted in 101.4 MB/s average write speed (75.6 MB average RAW file size), while a scene with moderate amount of detailed averaged 84.0 MB/s (55.7 MB file size), and with lens cap on 84.0MB/s (45.8 MB file size). The most detailed scene is used for this card comparison test.

Below are the 10 fastest cards from their tests: 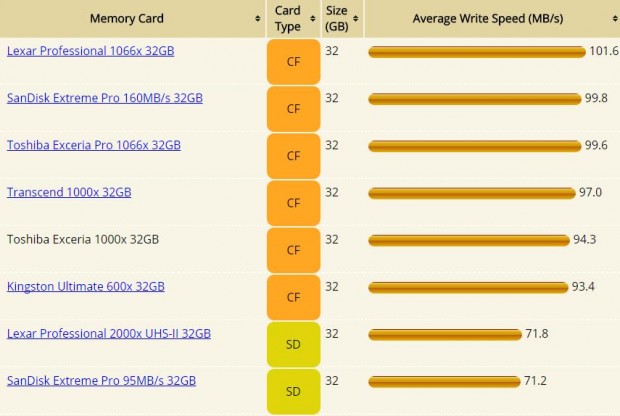