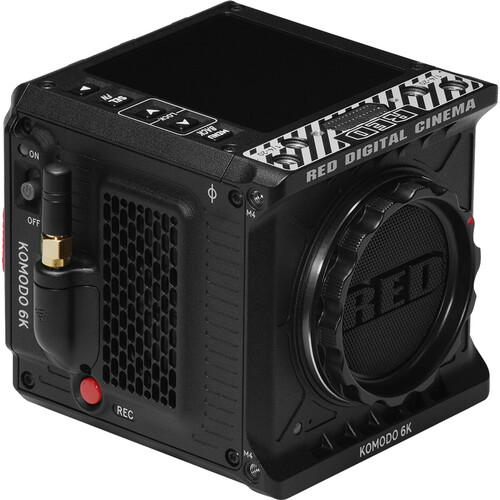 The RED KOMODO 6K Compact Cinema Camera is now officially announced and it is now available for pre-order at B&H, Adorama. The US price is $5,995.

RED has taken fresh steps with the release of the KOMODO 6K Digital Cinema Camera by bringing their legendary image quality and color science into an ultra-compact, all-in-one design that weighs just 2.1 lb measures about 4 x 4 x 4″. Key to achieving this goal was the use of the Canon RF lens mount and the KOMODO 19.9MP Super35 CMOS sensor which boasts Global Shutter technology. This sensor can create images with 16+ stops dynamic range and eliminates rolling shutter artifacts. Users can also be certain they are getting RED quality thanks to the ability to record up to 6K at 40 fps, 5K at 48 fps, 4K at 60 fps, and 2K at 120 fps in REDCODE RAW for incredible flexibility in post-production.

The camera features include a brand-new, 19.9 MP Super 35 CMOS sensor that records an impressive maximum resolution of 6144 x 3240 at up to 40 fps when recording in sensor mode. It records onto a proprietary CFast 2.0 card with a data rate up to 280 MB/s and can record and output up to 4K60, and up to an impressive 2K120 for slow and variable motion shots, all in REDCODE RAW R3D format. It also supports ProRes 422 HQ format up to DCI 4K60 and 2K120 for quicker transfer and turnaround time.

The KOMODO also utilizes a global shutter, which is rare on many current video cameras. Global shutters differ from a rolling shutter by capturing the entire sensor area simultaneously when creating the image rather than a sequential, line-by-line scan of the rolling shutter (see our article about global versus rolling shutters for more information). The global shutter eliminates artifacts due to rolling shutter and has been optimized here to still provide images with low noise and high dynamic range.

In terms of color management, the camera supports RED’s IPP2 (Image Processing Pipeline) for dynamic color and gamma with intense detail and high roll-off that is standardized throughout the RED camera range. Using IPP2 as well as 3D LUTs (Lookup Tables) and the ability to import CDLs (Color Decision Lists) allow you to standardize your look across multiple RED cameras.