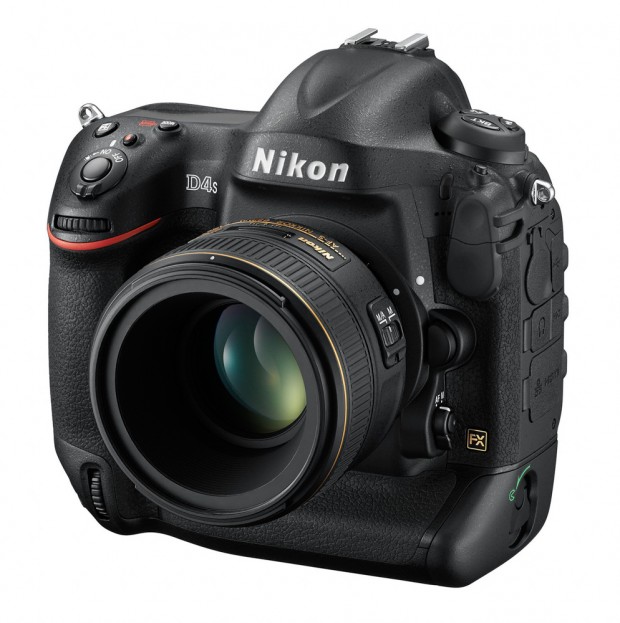 Nikon has announced the new Nikon D4S flagship full frame DSLR. While not a major upgrade to the camera (hence the ‘s’ in the name), the D4s packs more processing power, a refined autofocus system, faster continuous shooting, and more video features (including 1080/60p support). Two other items pros will appreciate are a ‘small’ Raw size and a noticeable improvement in battery life compared to the D4. The camera will be available in early March for $6499.95.

Pre-order & Buy:
You can buy Nikon D4S on Amazon, B&H, Adorama and ebay.

Features:
Hands-on with the Nikon D4s, with insights from its creators

‘the D4s has a newly-developed imaging sensor, although it’s still 16MP the noise characteristics are better and the imaging processing engine is now Expeed 4, so with the sensor and the new engine together the standard ISO range has increased to 100-25,600. This is higher than the D4 by one stop.’

‘Photo quality has improved in three ways – detail resolution, ‘three-dimensionalness’ and skin tone, not only for stills but also video – the image quality is better overall.’

‘The other main improvement is autofocus. The algorithm has been improved and tracking of moving subjects is better. We’ve also added an additional AF mode ‘group area autofocus’ which means that when you select a single AF point, the four points around it are also used.’

‘Mirror bounce is also reduced, which means a shorter blackout time. With the improved AF tracking the maximum frame-rate with continuous AF is now 11fps, increased from 10 fps in the D4. ’

According to Mr Matsushima, some of Nikon’s professional users are ‘asking for 4K video’ but evidently the time is not yet nigh. Maybe in the D5…

‘The AF point selectors on the rear of the camera are now plastic instead of rubber, so the response is better and more ‘crisp’. The AF-ON button is easier to press now and we’ve expanded the rubber grip area on the back of the camera for a better grip with less slippage.’

Extreme Speed and Accuracy Give the Edge in the Field

Whether shooting extreme action sports or elusive wildlife, the Nikon D4S has been engineered to be the ultimate combination of speed and accuracy, giving photographers the power to capture even the fastest moving, unpredictable subjects with confidence and control. The proven Multi-CAM 3500 FX AF sensor module’s thoroughly recalibrated AF algorithms quickly zero in on its intended target— no matter how near, far, or abruptly a subject appears in the frame. Additionally, the D4S includes a new innovative Group AF mode. When selected, this mode utilizes five AF points to provide increased stability while tracking subjects, and enhanced accuracy by reducing instances of background focus. In situations where the background is bright with strong contrasting colors, photographers can now feel more confident, knowing that small, distant and fast-moving objects can be rendered sharper, faster and more frequently. Nikon’s AF Lock-on technology is also upgraded, shortening time in reverting from focus interruptions, such as a referee running into the frame.

Hundredths of a second can make the difference when capturing the decisive shot that graces the front page, the double-truck spread, or the client’s mantel. With this in mind, the Nikon D4S also improves tracking on high-speed continuous shooting at a blazing fast 11 fps, with continuous AF/AE. Because missing the shot is just not an option, Nikon’s EXPEED 4 plays an integral role in the D4S’ seemingly instantaneous response and swift performance, while enhancing energy efficiency. The camera now features a processing time that is a full 30% faster, in addition to a 200-shot buffer (JPEG) at full resolution at the maximum continuous mode.

As a proven flagship for the world’s most demanding photographers, the D4S retains the features that made its predecessor the professional’s choice in the first place. The Nikon D4S HD-SLR aligns 15 cross-type sensors in the center to detect contrast data in both vertical and horizontal planes. In addition to detecting each AF-NIKKOR lens with an aperture of f/5.6 or lower, the camera also utilizes nine cross-type sensors that are fully functional when using compatible NIKKOR lenses and a teleconverter with a combined aperture value up to f/8, a great advantage to those photographing sports and wildlife from extreme distances.

The Advantage of Superior Image Quality
At the core of the Nikon D4S is a newly developed 16.2-megapixel FX-format CMOS Sensor (36 x 23.9mm), engineered to deliver an immersive dynamic range, with exceptionally low noise. This newly developed image sensor works in tandem with the latest generation of Nikon’s powerful image processing engine, dubbed EXPEED 4, to bolster image quality, color and sharpness in both stills and video. The benefits of EXPEED 4 go well beyond high-speed image processing to provide evolved real time noise reduction, along with depth and clarity gradation rendering. The resulting images exhibit a wide tonal range, with true and faithful colors.

Thanks in part to the new EXPEED 4 processing engine, the Nikon D4S now shatters the perception of what’s possible with available light photography, giving users a native ISO range from 100-25,600 expandable from 50 ISO (Lo-1) to a staggering 409,600 ISO (Hi-4). This amazing ISO range rewrites the rulebook for available-light shooting, and is especially useful for professional sports shooters, photojournalists, as well as military and law enforcement agencies. The powerful EXPEED 4 image-processing engine incorporates an entirely new algorithm for even higher ISO noise reduction and color fidelity, resulting in an enhanced overall sharpness and clarity without sacrificing subtle textures and luminous details. The enhanced ISO is also a major advantage for other professionals including wedding and portrait photographers, who can now confidently capture the darkest reception, a candlelit ceremony, or create crisp studio portraits with flawless fidelity.

Other advanced Nikon technologies also contribute to the superior image quality of the Nikon D4S, including a new enhanced standard Picture Control tone curve that gives greater depth and clearer color rendition, especially on skin tones. For additional versatility, users have the ability to toggle Face Detect AF on or off while shooting through the viewfinder, and white balance calculation has been further refined for accuracy, while spot white balance is employed for easier presetting with more options.

Nikon’s exclusive 91,000-pixel RGB 3D Color Matrix Metering III system returns on the D4S to help capture true-to-life colors while solving the most challenging exposures, from sun-lit snow to stadium lighting. The system works by meticulously analyzing the variables within each scene and recognizing factors such as color and brightness values with unprecedented exactness. This data is then interpreted and compared against the camera’s on-board database to implement various settings, resulting in vibrant images with faithful color reproduction and balanced exposure.

Faster Workflow During and After Capture
While shooting speed and response matter in the moment, workflow speed has become increasingly important in a more competitive landscape. The D4S delivers upon the need for that speed with features that are engineered for today’s professional:

With an increase in potent processing power, the D4S ups the ante when it comes to multimedia workflow and content capture. A versatile tool on location or on set, the D4S offers enhanced video quality and video-friendly features, in a compact and lightweight HD-SLR form factor. In addition to the innovative video attributes from the D4, the D4S offers the following new features:

As a flagship camera for professionals, the D4S is engineered to excel in the world’s toughest environments, while giving pros the features needed to get the shot. The shutter has been tested to 400,000 cycles, and the camera chassis is constructed of lightweight and durable magnesium alloy. Additionally, the camera is sealed and gasketed from moisture, dust and electromagnetic interference to resist the elements.

While shooting, users will appreciate a slightly modified control layout and ergonomics for faster and more comfortable shooting. Subtle changes increase grip and comfort, making the camera easier to hold for a wider range of hand sizes and more comfortable during prolonged use. Photographers will also benefit from composing through a bright viewfinder with 100% coverage. The D4S also features a newly designed mirror-moving mechanism, which uniformly and effectively absorbs mirror slap to minimize viewfinder blackout time. Even at 11 fps, this innovation makes it easier to track a fast subject through the optical viewfinder.

The wide and bright high-resolution 921k dot, 3.2-inch LCD screen of the Nikon D4S lets users easily change menu settings, compose and review images. Photographers have the ability to customize the color of the LCD monitor to better match studio monitors or personal preference. Additionally, the LCD monitor retains its auto-brightness function that automatically adjusts the brightness of the monitor to increase visibility and conserve battery life.