We know that Sony a7RII has many new key features, and there is a closer look at the Sony a7RII by DPReview that unveils some interesting info:

1) BSI design with thinner photodiodes: The new BSI design and flat photodiode substrate should help avoid shading and coloration issues with legacy glass.
Something we think is very interesting is Sony’s claim that, due to the effective increase in lateral space for the active pixel area from going backside-illuminated (BSI), pixels are able to receive more oblique light rays, which helps with issues like extreme vignetting and color shifts at the peripheries of the image.
The current design in the a7R II should allow for high resolution (small pixels) and the ability to accept very oblique light rays – particularly important for legacy glass that has an exit pupil located very close to the sensor. This ability essentially makes the sensors more ‘film like’: film avoided many of these issues by having an essentially flat, 2D structure with very little depth.

A backside-illuminated structure tends to offer more light gathering area per-pixel, which means better low light performance. This becomes particularly important with high resolution sensors, where all the extra pixels means a lot of extra electronics. Moving these electronic components out of the active image area means they get in the way less of that precious light in low-light scenarios demanding high ISOs. And you get ISO 6400 images looking like this (technically, this was shot at ISO 3200, but required a 1 EV push, so is approximately equivalent to what you’d get with a ‘properly exposed’ ISO 6400 file).

3) BSI and dynamic range: Bill Claff’s independent studies on the dynamic range of the a7R II indicate it’s better at every ISO relative to the a7S.
There’s another benefit of pushing the electronics off of the active pixel area to the back: extra room for more electronics. And initial tests by some very knowledgeable engineers – guys that test cameras and share their findings right here on our site – indicate that a dual-gain implementation like the one found on the a7S exists in the a7R II. This architecture essentially boosts the signal even more, at around ISO 640 on the a7R II (and at 1600 in the a7S), really early on in the signal pathway, to ensure that any noise added by the camera has minimal effect on the (now ‘louder’) signal. This essentially means increased dynamic range at higher ISOs. Of course, there’s only so much you’re going to gain, because the noise floor is already very low on these Sony sensors, but every boost in performance is appreciated.

4) The faster sensor in the a7R II allows it to reset all 42 million photosites fast at the start of the exposure, meaning the mechanical shutter doesn’t even need to be used at the start of your exposure.

5) So what’s the big deal? Electronic front curtain plus no mirror is the big deal. No moving parts around the sensor means you don’t have to worry about keeping your shutter speeds high to make use of the full potential of all of those pixels. And on top of that, you’ve got in-body image stabilization (IBIS) to stabilize things for you further. And no shutter movement at the beginning of your exposure either, so nothing sudden for the image stabilization system to respond to and make matters worse.

6) Dual-gain implementation like the one found on the a7S exists in the a7R II. This architecture essentially boosts the signal even more, at around ISO 640 on the a7R II (and at 1600 in the a7S), really early on in the signal pathway, to ensure that any noise added by the camera has minimal effect on the (now ‘louder’) signal. This essentially means increased dynamic range at higher ISOs

7) The Sony RAW compression can limit dynamic range: The posterization artifacts are due to Sony’s lossy compression, which you can read more about in Iliah Borg’s excellent study here. You’ll also see in Iliah’s article that this can particularly be an issue with star(trail) shots, which tend to have sharp, high contrast transitions.

8) Sony claims a 40% increase in AF response compared to the original Alpha 7R, in particular because of faster contrast-detect AF, but we actually think this estimate is underselling the capabilities of the a7R II. Considering the accuracy of focal plane AF points, which is far higher than most AF points of DSLRs, the ability of the a7R II to focus quickly and continuously is no small matter.

9) Eye AF is potentially game-changing for wedding photography, newborn photography, and generally photojournalistic and candid photography where you need to react to a subject quickly. Combine this with the focus accuracy of on-sensor AF implementations, and you have a usable way of instantaneously and accurately focusing on the eye of a subject, even at 35mm F2 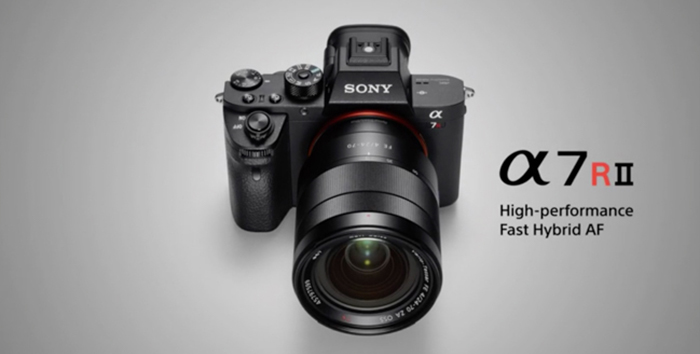 DPReview will do more in-depth testing, including a segment where they pit the a7R II against some of the best AF systems in DSLRs.