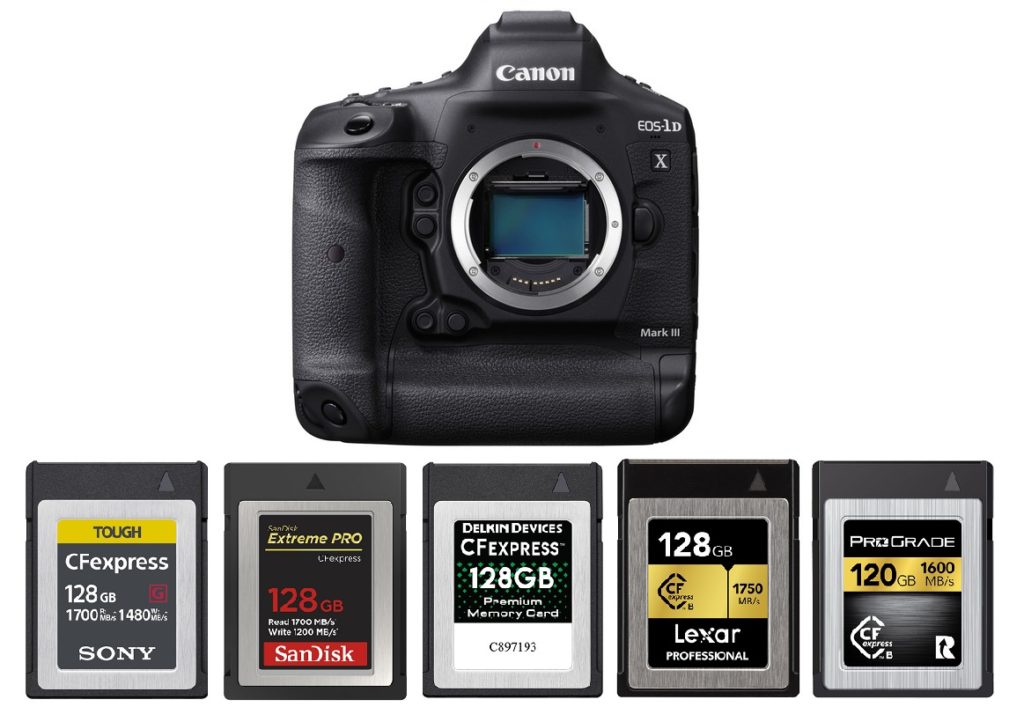 The Canon EOS-1D X Mark III (Amazon, B&H, Adorama) is a powerful DSLR camera designed for the professional sports, photojournalist, wildlife and wedding photographers, and it has dual CFexpress Type B card slots that cater to the fast-continuous shooting rates and high-resolution video recording and also offer a flexible means for storing and sorting file types. Featuring a newly designed 20.1MP full-frame CMOS sensor and updated DIGIC X image processor, the Canon EOS-1D X Mark III is capable of continuous shooting rates up to 16 fps with the optical viewfinder or 20 fps in live view, with a 1000-shot buffer when shooting raw+JPEG, and it has the ability to record uncropped DCI 4K video internally at up to 60 fps with 10-bit, 4:2:2 color, as well as Full HD at 120 fps and raw 5.5K (5472 x 2886) at 60 fps. So, that means the Canon EOS-1D X Mark III camera can record the a 5.5K RAW on one CFexpress card while simultaneously recording a high quality 4K MP4 video on the second CFexpress card.

So, in order to get the ultra high read speeds (transfer speed) and write speeds (fast buffer clearing time) to get the best out of your camera, here we list the top recommended and fastest CFexpress cards for the Canon EOS-1D X Mark III DSLR camera, and we highly suggest you pick up two CFexpress cards from the list below.

If you just want to cut to the chase, here are our top recommended CFexpress cards for Canon EOS-1D X Mark III DSLR camera:

Any of these make for a good choice. If you’d like more detailed recommendations, you can find them below. 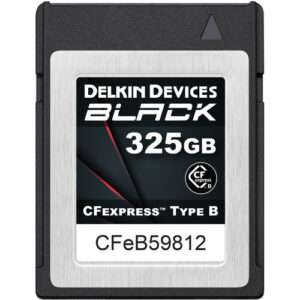 Designed for the most demanding of photography and videography, the Delkin Devices BLACK CFexpress Type B Card is ideal for capturing the highest quality raw images and continuous-burst shots, as well as 8K, 6K, and 4K videos. Featuring an impressive PCIe 3.0 interface, you can enjoy lightning-fast read speeds of up to 1725 MB/s and write speeds of at least 1530 MB/s. Available in capacities of 75GB, 150GB, 325GB, 512GB, and 650GB, and protected with a 48-Hour Replacement Guarantee, the card is made from a rugged design that’s waterproof, shockproof, and can withstand extreme temperatures. All this is covered by a Limited Lifetime Warranty for peace of mind. 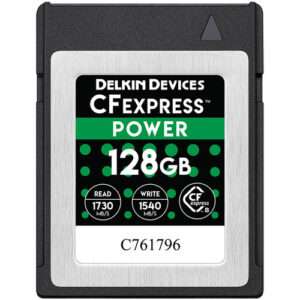 Delkin Devices POWER CFexpress Type B Cards provide a phenomenal performance, with read speeds of up to 1730 MB/s and write speeds of up to 1540 MB/s, and are an excellent value too, with a 48-Hour Replacement Guarantee, Limited Lifetime Warranty, and often more affordable than the Delkin Devices Black Cards. Plus, you can trust in their durability – they’re designed to be shock, water, magnet, and X-ray proof, anti-static, UV-guarded, and resistant to extreme temperatures, in capacities of 128GB, 256GB, 512GB, 1TB, and 2TB. 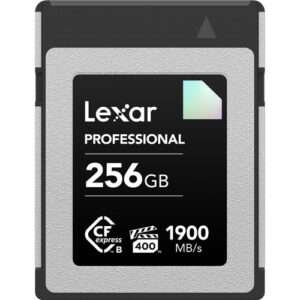 The Lexar Diamond CFexpress Type B Card is designed to meet the demands of pro filmmakers and content creators, boasting read speeds of up to 1900 MB/s and write speeds of up to 1700 MB/s, and with a minimum sustained write speed that won’t drop below 1600 MB/s – perfect for capturing smooth raw 8K, 6K, 4K and beyond video. Plus, it complies with the VGP-400 video class standard, offering a guaranteed write speed of at least 400 MB/s. Despite its incredible speed, the Card is not cheap – but with capacities of 128GB and 256GB, plus a Limited Lifetime Warranty, it’s an investment worth making. 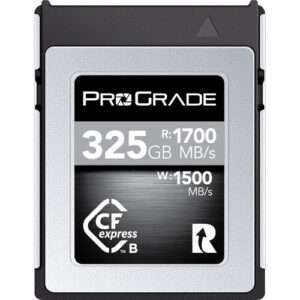 Prograde Digital’s Cobalt CFexpress Type B card has got it all – lightning-fast speed, great value, and unbeatable reliability! It’s one of the fastest and most competitively priced cards on the market, perfect for capturing raw 8K, 6K, and 4K video, with read speeds up to 1700 MB/s and write speeds of up to 1500 MB/s. What’s more, the Cobalt guarantees a minimum write speed of 1400 MB/s and is resistant to temperature extremes, shock, vibration, and X-rays. 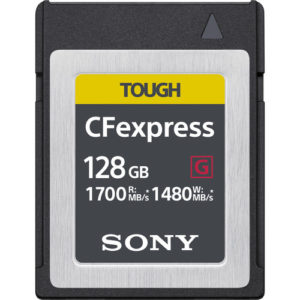 The Sony TOUGH CFexpress Type B Card is the perfect blend of strength and speed. Boasting read speeds up to 1700 MB/s and write speeds up to 1480 MB/s, this card offers exceptional performance for recording high-quality videos, bit-rates, compressions and continuous raw photo shooting. It is also designed to withstand falls from up to 15′ and has been rigidity tested to 70 N of force – making it extremely robust and reliable. Additionally, it is protected against extreme temperatures, X-rays, electrostatic, and UV lighting. With capacities ranging from 128GB to 512GB, this card is also backed by a 5-Year Warranty. 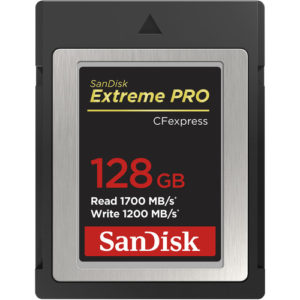 SanDisk offers a perfect blend of speed, reliability, and affordability; not the swiftest, but highly dependable and reasonably priced. The SanDisk Extreme PRO CFexpress Type B Card delivers read speeds up to 1700 MB/s and write speeds up to 1200 MB/s (128GB, 256GB) or 1400 MB/s (512GB), providing you with a low-latency recording experience and a greatly improved workflow. Available in 64GB, 128GB, 256GB, and 512GB capacities, and backed by a Limited Lifetime Warranty. 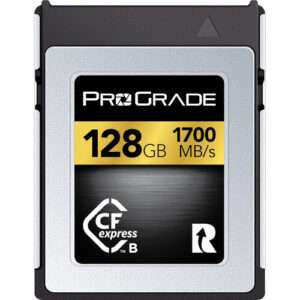 If you’re more of a casual photographer and don’t shoot 8K/Raw or 4K/120 video, then Prograde Digital Gold cards are the perfect pick for you! They provide great value and are perfect for all types of photography, except maybe super-fast sports and wildlife shooting, where you would need to upgrade to faster cards. So, don’t bother with the pricey high-speed CFexpress Type B cards if you don’t need them.