QuantumFilm Sensors: See the camera in a whole new light!

“Compared to CMOS, quantum films have a very big advantage, is very thin. Jess said, quantum well thin film sensor modules can do 4mm, and minimum can only do 4.8mm CMOS sensor module, though only the 0.8mm gap, but used on cell phone cameras and wearable devices, will be a big change, maybe your next-generation iPhone camera will not be highlighted.”

“InVisage will focus on cell phone cameras, this is a very large market and opportunities. Smartphone carrying quantum thin-film technologies are expected to be listed in 1 year.”

“…we have no competitors or partners before, but last year we held out olive branches of the two companies, Sony is one of their quantum is very interested in thin film technology.”

The biggest advantage is that absorption capacity can increase the dynamic range of the camera, dynamic range represents the phone can take a much brighter white and dark black, best embodies quality and filmed under strong light at night. Low light performance is the greatest weakness of the CMOS sensor and mobile phones cannot be one of the main reasons that night.” 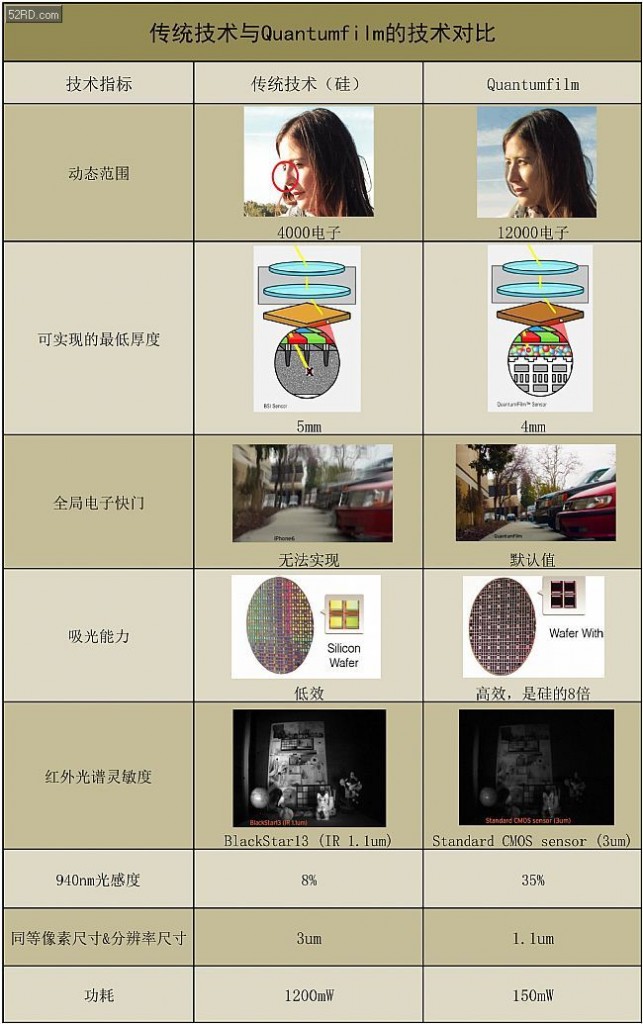 QuantumFilm Technology involves the creation of a film to coat the image sensors used in a cellphone camera, allowing it to capture more light, improving the quality of the images taken. A typical camera phone pixel sensor is made up of several layers, with a layer of colored plastic or glass acting as a color filter sitting on top of several layers of metal connecting silicon electronic transistors together, which is itself on top of a base layer of silicon used by the sensor’s electronic transistors and photodetectors. The light coming to the sensor has to pass through the layers of metal before reaching the silicon, a weak light absorber, so the sensor detects only about 25 percent of the light that makes up the image. QuantumFilm Technology places a layer of semiconducting crystals – called quantum dots – on top of the chip, which allows the chip to absorb more light, place more pixels in a smaller space, and create sharper images.

Using quantum dots is more efficient at capturing light than traditional silicon-based image sensor chips (capturing 90-95% of the light that hits it), giving the sensors higher sensitivity in low light as well as higher resolution. And while traditional image sensors read an image from top to bottom (which can create a blurred image when the subject is moving), quantum dots detect the entire image at the same moment, reducing the chance for distortion.

Invisage holds patents related to the development of QuantumFilm technology, as well as its applications toward optoelectronic devices.