Agreed. PDAF works with Canon lenses via Metabones adapter, and A-mount lenses via the LA-E3. We’re checking to see if you actually get the full AF coverage with subject tracking, but for now, consider our minds blown.

It works, and it works very well. And yes, I just saw it demonstrated.

AF with A-mount and third-party lenses

Sony says the on-sensor phase-detection AF can be used with A-mount lenses using the simpler LA-E3 adapter, rather than the LA-E4 that had an SLT mechanism built in. At the press launch in New York we even got a glimpse of the a7R II autofocusing Canon EF lenses using a Metabones electronic adapter. Focus appeared to be on par with OVF focus on a native Canon body, and the AF experience itself didn’t appear to be limited simply because you’re using a third party lens (full coverage and tracking are available).

On-sensor phase detection elements cover 45% of the sensor, which may sound small but actually translates to around 67% coverage in each direction. While this is some way behind level of coverage offered on Samsung’s NX1 (or even Sony’s APS-C cameras), it’s still a considerably larger area than that covered by any full frame DSLR’s focus sensor.

It also gains an electronic first curtain shutter option to eliminate shutter vibration, which was a problem with the original a7R at longer focal lengths. It also offers a fully electronic silent shutter. 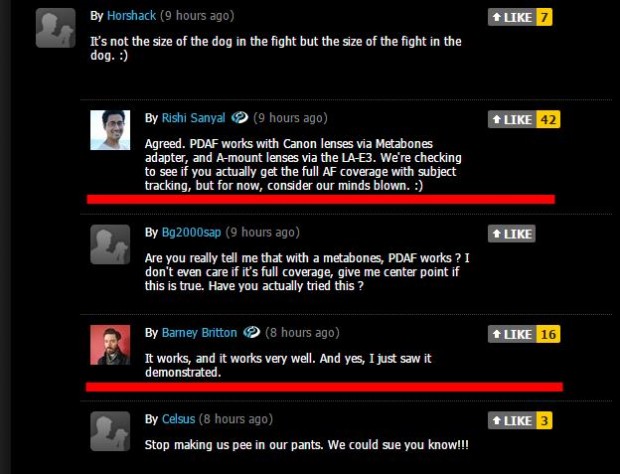