Samyang 50mm f/1.4 AS UMC Full-frame Lens has been officially announced at Photokina 2014.

The new Samyang 50mm f/1.4 AS UMC is a “photography” version of Samyang 50mm T1.5 AS UMC lens (Video DSLR version). With a wide open f1.4 aperture, the lens features 8 aperture blades, manual focus, 9 elements in 6 groups. Aimed at photographers, the lens is a perfect portrait lens with an aperture ring and a manual focus ring. And the photographers can shoot more comfortably in low light situations without having to bump up their ISO or long shutter speeds.

The new Samyang 50mm f/1.4 AS UMC Lens will be available for a variety of lens mounts including Canon EF, Canon M, Nikon, Sony Alpha, Sony E, Pentax K, Fujifilm X, Samsung NX, Micro Four Thirds, Four Thirds. And it will be priced at £419 ($680) and the release date has not been set yet. 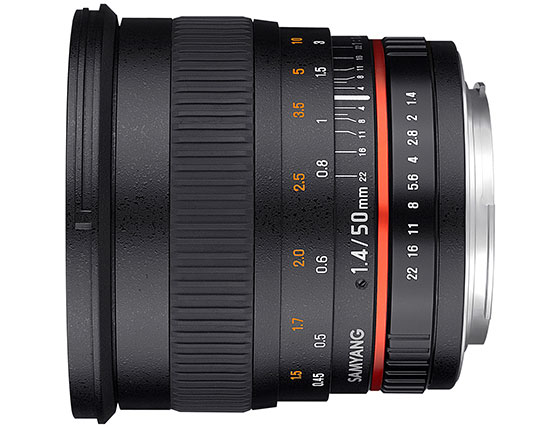 Samyang 50 mm f/1.4 AS UMC has been designed for cameras and camcorders fitted with photosensitive 24x36mm or smaller sensor. It gives 46.2 degrees field of view, and thanks to high brightness value of f/1.4 it comes as a great tool in poor lighting conditions, ensuring splendid image quality and small depth of field.

Optics of the lens consists of nine lens elements arranged in six groups (including one aspherical and one hybrid aspherical lens element). To ensure high contrast and faithful colour reproduction, all lens elements have been covered with multi-layered UMC anti-reflective coatings.

Samyang 50mm f/1.4 lens ensures exceptionally smooth and aesthetic mapping for out of focus areas beyond the focal plain, producing the so called bokeh effect. Thanks to the eight-bladed aperture, the subjects located outside the depth of field are shown with extremely smooth features. This feature will be appreciated by professional filmmakers and photographers taking portrait photos.