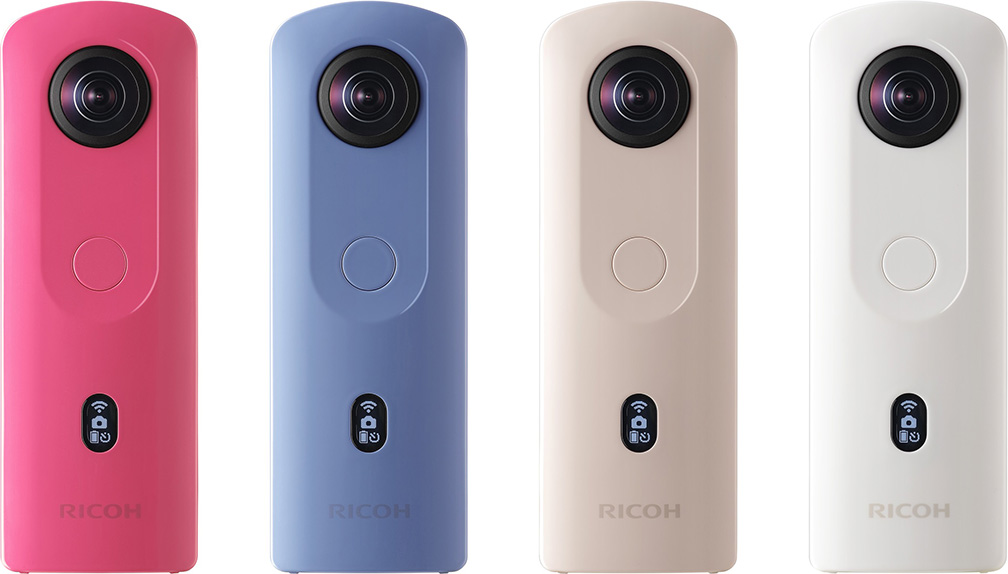 Ricoh just officially announced the new Ricoh THETA SC2 4K 360 Spherical Camera. The Ricoh THETA SC2 is the entry level model to the RICOH THETA 360° camera series, capable of capturing 360° still images and video footage. Designed for casual use, the Ricoh THETA SC2 is simple to operate for beginners and everyone else, and it’s so compact it can be kept in your pocket at all times and pulled out in any situation to capture 360 photos and videos.

Available in White, Blue, Pink and Beige colors, the Ricoh THETA SC2 is priced at $299.95, and it is now available for pre-order at Amazon, B&H, Adorama.

Since its release in 2013 as the world’s first Note 1 360° camera, “RICOH THETA” has been used in a multitude of environments and offers unlimited potential for image expression. Due to the rapid growth of the VR (virtual reality) market, the increasing number of social media services that are compatible with 360° images, and the growing demand for 360° images in the business market, 360 photography has become increasingly relevant.

The new RICOH THETA SC2 is an easy-to-use model , perfect for the 360 enthusiast, allowing anyone to capture high-quality spherical images. It snaps photos at approximately 14 megapixels, and smooth, immersive 360°spherical video at 30 fps (frames per second) in 4K (3840 × 1920 pixels). Additionally, the RICOH THETA SC2 comes with a variety of shooting modes such as “Face” mode, which recognizes human faces and applies skin smoothing, and “Night View” mode for shooting low-noise footage after the sun goes down. These modes allow the photographer to configure the camera with minimal effort.

In addition to the status OLED display (Organic EL display) in the lower section of the body, that allows at-a-glance checking of a range of information such as setting modes and battery power remaining, the RICOH THETA SC2 also features a new button that lets the user switch to self-timer mode, making the camera much easier to operate in a standalone manner. Staying true to the product concept of a compact, lightweight body, the RICOH THETA SC2 can be used as a live blogging camera that people can carry with them to record the events of their day. The lineup features four different Fresh Colors, allowing users to choose a color variation to suit the scenario in which they will use it or their preferences. This is the perfect camera for people who enjoy sharing pictures and videos on social media, or for those who wish to start using a 360° camera.