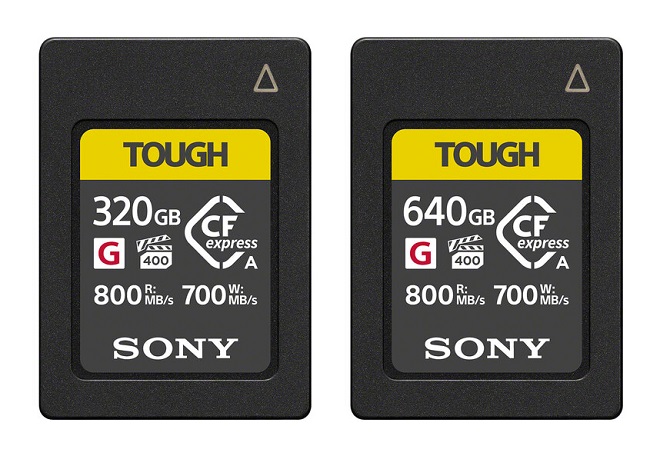 The newly announced Sony 320GB/640GB CFexpress Type A TOUGH Memory Card are now available for pre-order at major US stores:

The compact and high-performance CFexpress Type A memory card CEA-G320T will be available in October for approximately $650 USD and $850 CAD (CEA-G320T),while the CFexpress Type A memory card CEA-G640T16 will be available in December for approximately $1,250 USD and $1,630 CAD. In addition to the existing 80GB and 160GB cards, large capacity 320GB and 640GB cards will be added to the series.17

These large capacity cards support high-speed performance with a maximum writing speed of up to 700MB/s and Video Performance Guarantee “VPG400”, which offers sustained writing speeds of up to 400MB/s, and enables 4K 120p high bit rate video shooting.

The new large capacity cards have achieved TOUGH specification, which means they have been certified to be waterproof, dustproof, and robust enough to support stable long-term shooting in various environments. 18

17 1 GB = one billion bytes. A portion of this card capacity is used for system files and may vary.

18 Actual performance may vary. Based on environmental conditions and usage. Sony does not guarantee damage to recorded data or card based on every situation or condition.