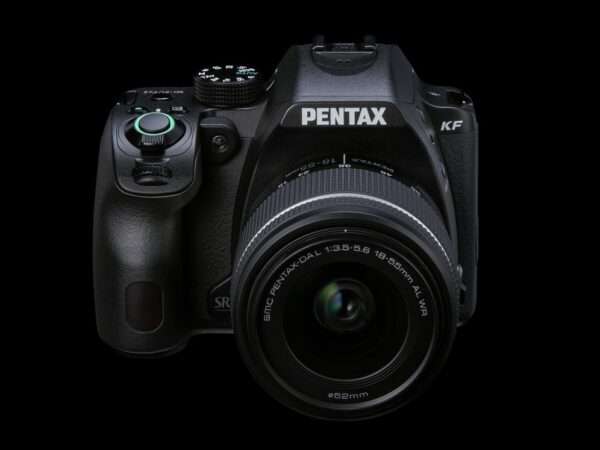 The Pentax KF takes after the K-70 by having a weather-sealed body and a swivel and twist back LCD, both of which are useful for shooting in low light or when it’s hard to hold the camera at eye level.

The KF’s 1.04M dot articulating LCD display is a significant upgrade over the 921K dot display used on the K-70. Weight-wise, the KF is only a little more manageable than the K-70, coming in at 625g (1.4lb) against 627g (1.5lb). Ricoh has assured us that there are no discernible functional differences between the internal components despite the internal weight reduction, however they have not elaborated on what precisely has lowered the weight.

This compact, dustproof and weather-resistant camera, optimized for all types of outdoor photography, provides a host of advanced, user-friendly features including a bright optical viewfinder, one of the benefits of DSLR shooting.

The main changes over the K-70 are:

In addition to the standard black body camera, two special-edition color models — crystal blue and crystal white — will be available worldwide in a limited quantity of 700 units each. These will be available in late November only at www.us.ricoh-imaging.com for the manufacturer’s suggested retail price of $899.95.

The PENTAX KF is designed to provide outstanding imaging performance in a rugged, highly portable body. It provides dependable, cold-proof performance down to temperatures as low as 14°F (-10°C), performing superbly in a wide range of weather conditions. While considered a mid-range model, the new camera incorporates an array of advanced functions and user-friendly features usually found only in higher-end models including a pentaprism-type optical viewfinder with a nearly 100% field of view and an in-body shake-reduction system with a 4.5-shutter-step compensation. It also provides the double e-dial system identical with top-of-the-line PENTAX models, as well as PENTAX-original shooting features, such as the Hyper Program system, which allows the user to instantly switch the exposure mode from Program to Aperture-priority or Shutter-priority without taking his or her eye off the viewfinder.

“With the PENTAX KF, even first-time SLR users can easily and effortlessly enjoy the benefits of SLR photography and explore the entire process of making digital images,” said Ken Curry, president, Ricoh Imaging Americas. “The PENTAX KF is an extension of our PENTAX K-70, sharing many of the same features and proven performance even in extreme outdoor conditions. As the only major manufacturer still producing true SLR cameras and building on our legacy and roots in SLR, high-quality still photography, we’re proud to fill the gap in the market and offer a high-quality, full-featured DSLR for less than $1,000.”

| Main Featues of the PENTAX KF |

* When using this system, the user is advised to stabilize the camera firmly on a tripod. When a moving subject is captured in the camera’s image field, its image may not be reproduced clearly, either in part or as a whole.
** The movement may not be sufficiently corrected when the object is moving in a certain direction and/or pattern. This function does not guarantee that the movement is properly corrected with all subjects.
*** This function works most effectively with a shutter speed of 1/1000 second or slower. This function may not be combined with some shooting modes, including the Pixel Shift Resolution system.