Building on the PENTAX K-3 camera’s rugged dust proof and weather-resistant construction, the K-3 II features a built-in GPS receiver, GPS log and electronic compass purposedesigned to stand up to demanding location work. The GPS system records shooting location, camera orientation, altitude, and provides a date/time stamp tied specifically to your images; all of which can be transferred to a computer and mapped using services such as Google Earth. 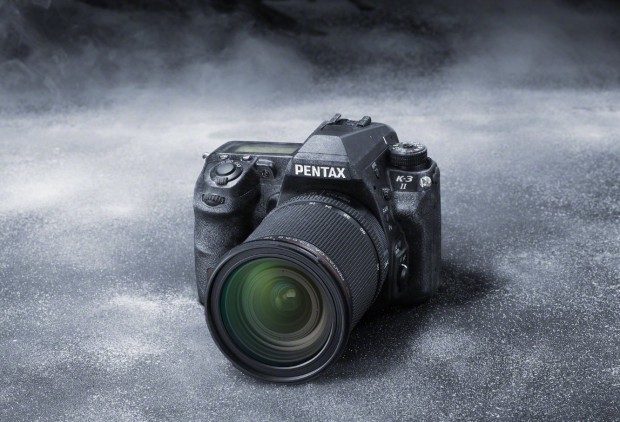 The K-3 II combines an APS-C-size CMOS image sensor free of an anti-aliasing filter with the high-performance PRIME III imaging engine — identical to the one installed in the PENTAX 645Z medium-format digital SLR camera — to optimize the imaging power of approximately 24.35 effective megapixels and deliver sharp, fine-gradation images. It also effectively minimizes annoying noise generated at higher sensitivities, allowing high-grade, high-sensitivity shooting even at the top sensitivity of ISO 51200.

The K-3 II comes equipped with a PENTAX-developed SR (Shake Reduction) mechanism that can be used with any compatible PENTAX interchangeable lens.* Thanks to its new, high-precision gyro sensor, this mechanism assures more stable, effective camera-shake compensation than ever before, with an extra-wide compensation range of as much as 4.5 shutter steps — the widest of all K-series digital SLR models. Even when taking a panning shot, this efficiently controls the SR unit to always produce the best image possible under the given conditions.

The K-3 II features Pixel Shift Resolution System,** the latest super-resolution technology, which captures four images of the same scene by shifting the image sensor by a single pixel for each image, then synthesizes them into a single composite image. Compared to the conventional Bayer system, in which each pixel has only a single unit of color data, this new system obtains all color data in each pixel. This innovative system delivers super-high-resolution images with far more truthful color reproduction and much finer details, while significantly lowering the level of high-sensitivity noise. Recorded images can also be synthesized, either on a computer using the accompanying utility software, or with the camera’s in-body RAW-data development function.

By applying microscopic vibrations to the image sensor unit at the sub-pixel level during image exposure, the K-3 II’s AA (anti-aliasing) filter simulator*** provides the same level of moiré reduction as an optical AA filter. Unlike an optical filter, which always creates the identical result, this innovative simulator lets the user not only switch the anti-aliasing filter effect on and off, but also to adjust the level of the effect. This means that the ideal effect can be set for a particular scene or subject.

The K-3 II’s SR unit has a flexible design that tilts the image sensor unit in all directions. This is one reason why the K-3 II can provide a host of handy shooting functions, including auto level compensation; image-composition fine-adjustment; and ASTROTRACER, which simplifies advanced astronomical photography.