Newark, NJ (September 1, 2015) – In response to the demand from the film production market, log video recording (V-Log L) is now available for the LUMIX GH4, and offers exceptional flexibility as well as wider dynamic range for color grading in post-production process. V-Log / V-Log L were developed to feature similar characteristics to Cineon, which is a characteristic curve for film digitalization. Taking full advantage of Four Thirds sensor, V-Log L boasts a log characteristic with 12 stops. Both V-Log and V-Log L have the same characteristic curve, and LUT (Look Up Table) can be utilized. 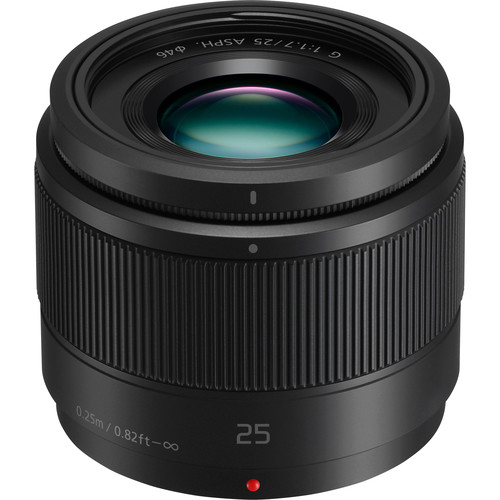 The new lens system is comprised of 8 elements in 7 groups featuring two aspherical lenses and an Ultra-High Refractive Index (UHR) Lens. Designed and developed focusing on the low-frequency contrast, the LUMIX G 25mm / F1.7 ASPH. assures stunning clarity for sharp crisp images. It features uniform descriptiveness from center to edges while suppressing spherical aberration and distortion. It incorporates a superior inner focus system which enables excellent resolution and contrast from the closest focusing distance to infinity. The inclusion of a stepping motor makes the focusing action smooth and silent for use in both still and video recording. When mounted on the Digital Single Lens Mirrorless (DSLM) cameras of LUMIX G, users can take advantage of the high-speed, high-precision Contrast AF system with a 240 fps digital signal exchange.

Seven blades give the aperture a rounded shape that produces an attractively smooth effect in out-of-focus areas when shooting at larger aperture settings. A highly reliable metal mount assures durability for active use, and uses multi-coated lens elements that minimize ghosts and flare to further enhance its shooting performance.