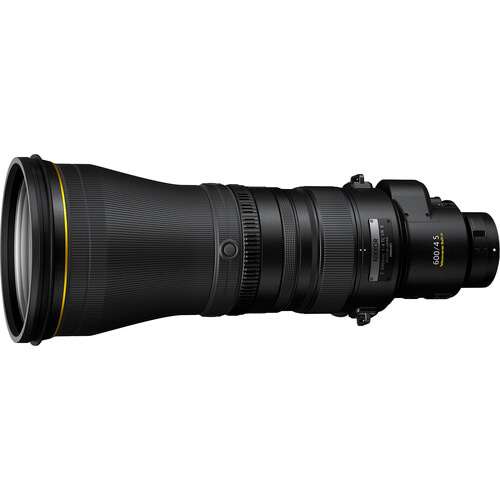 With its built-in 1.4x teleconverter, this lens is the longest Z-mount lens Nikon has manufactured to date, with an effective focal length of 840mm. There are a total of 19 elements in the lens (26 with the teleconverter), including 3 ED elements, 2 Super ED elements, and 2 short-wavelength refractive (SR) elements.

MELVILLE, NY (November 2, 2022) Nikon Inc. has announced the new NIKKOR Z 600mm f/4 TC VR S, the latest in an unrivaled collection of high-performance super-telephoto lenses for professionals. The new 600mm f/4 TC VR S offers an unprecedented combination of versatility and powerful performance, boasting the latest optical technology and anti-reflective coatings for the ultimate in image quality, plus the added benefit of a built-in 1.4x teleconverter for even more reach.

This is a pro lens, creating a new apex of performance for those capturing action, wildlife and sports, all while reimagining the 600mm to realize the potential of the larger Z mount. An extreme focal length paired with a fast f/4 aperture fills the frame with the subject, creating dramatic isolation with gorgeous background blur. The integration of a built-in 1.4x teleconverter gives the capability to seamlessly switch from an extreme 600mm to an astounding 840mm (FX mode), while maintaining superior optical performance throughout the frame.

“The range, capability and value that Nikon delivers with NIKKOR Z telephoto lenses continues to surpass expectations,” said Jay Vannatter, Executive Vice President, Nikon Inc. “This new S-line super-telephoto lens is just one more exciting addition to the rapidly growing line of lenses, which we will continue to expand.”

Superbly balanced and meticulously constructed for maximum durability and precise operation in nearly any environment, the new 600mm f/4 TC VR S serves as a brazen reminder of Nikon’s optical superiority and audacious innovative spirit. As an S line lens, it realizes exceptional rendering capability with overwhelming resolution and beautiful bokeh, with a lens body that’s over 14% lighter than its F-mount counterpart. Additionally, the lens uses the Nikon’s exclusive SSVCM drive system, locking tack-sharp focus of even the fastest moving subjects quickly, accurately and quietly, helping to nail the decisive shot, time and time again.

The new NIKKOR Z 600mm f/4 TC VR S will be available in late November 2022 for a suggested retail price of $15,499.95*. For more information about the latest Nikon products, including other NIKKOR Z lenses and the entire collection of Z series cameras, please visit nikonusa.com.

² An AF drive actuator that combines a Voice Coil Motor (VCM) and a guide mechanism developed by Nikon. The VCM is a motor in which a coil reciprocates in the strong magnetic field created by a powerful magnet.

³ Depending upon the subject, scene brightness, and focus position, AF may not perform as expected, regardless of the camera used, resulting in inaccurate focus, slow focusing, or flashing of the focus indicator.

4 The cameras compatible with this function are the Z 9, Z 7II, Z 6II and Z 30 only. When using the function, camera firmware update to the latest version is required.

5 Based on CIPA Standard; in NORMAL mode; this value is achieved when attached to a mirrorless camera equipped with 35mm film size image sensor.

6 Thorough dust- and drip-resistance is not guaranteed in all situations or under all conditions.

*SRP (Suggested Retail Price) listed only as a suggestion. Actual prices are set by dealers and are subject to change at any time.