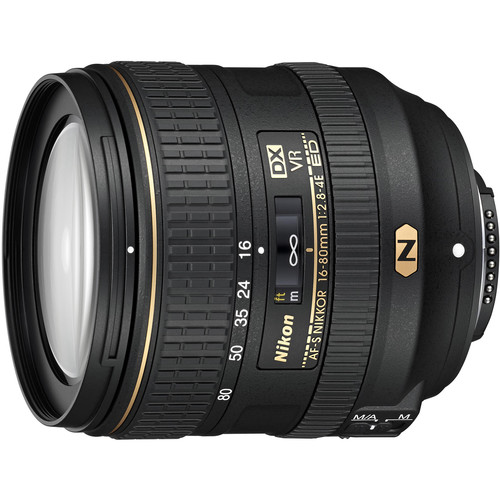 This Nikon 16-80mm f/2.8-4 VR DX is for the photographer with enough money to buy expensive lenses, but who doesn’t want to step up to full frame. Many people are going to love this lens because it’s so versatile, small and light and convenient.

In terms of image quality, the AF-S DX Nikkor 16-80mm f/2.8-4E ED VR is sharp in the centre if you stop down a little, although performance at the edges is not quite as good. Bokeh is surprisingly nice thanks to the 7 aperture blades, the 35cm minimum focusing distance throughout the zoom range makes the lens more versatile than you might expect, and flare is very well controlled even when including the sun in the frame. It does suffer from noticeable barrel and pincushion distortion at the ends of the zoom range, though, which you’ll have to correct in post-processing.

Although it’s nice to know that you’ll get consistent exposures when shooting at ten frames per second, and that dirt and moisture would rather find a more comfortable place to stay than on the optics of this lens, these are features that you’d rarely pay more than double for. Maybe, in time, as the price of this lens settles down its value will become better but at the moment, the extra expense seems difficult to justify.

The new Nikon AF-S DX NIKKOR 16-80mm f/2.8-4E ED VR Lens is really an amazingly versatile DX-format lens that is well suited for advanced and enthusiast photographers. So get it right now!