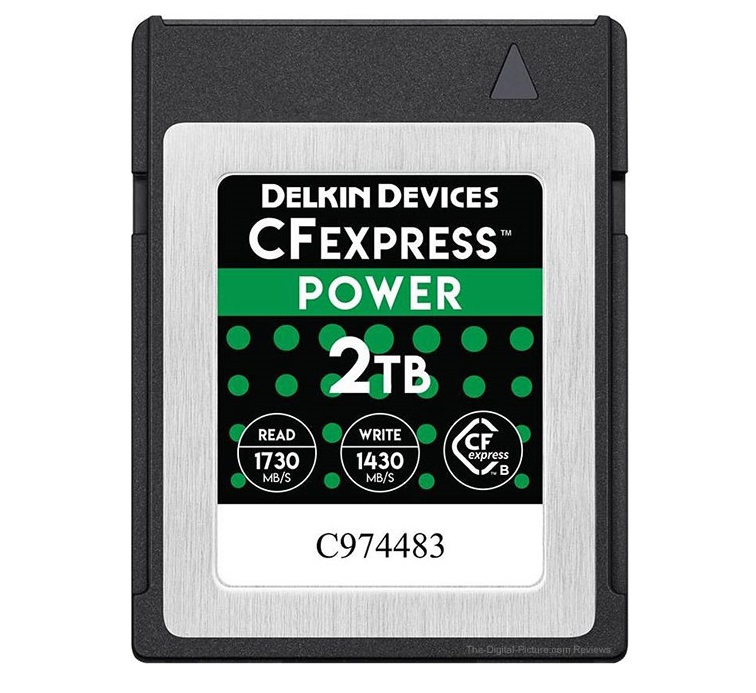 Delkin Devices announced the world’s first 2TB CFExpress Type B memory card – the highest-capacity CFexpress card to date. Built with strength, reliability, and performance, the 2TB CFexpress POWER Memory Card from Delkin Devices provides read speeds of up to 1730 MB/s and write speeds of up to 1430 MB/s, making it suitable for professional photographers and videographers. Designed to excel in high-end cinematic hosts, this card can capture 5.9K, DCI 4K, and Full HD video at standard and high frame rates of up to 180 fps, plus continuous shooting raw bursts of up to 200 still images.

“4K is standard today, 6K is on the rise, and now we’re making our way to 8K” says Jenn Sherry, Delkin’s Retail Sales & Marketing Manager, “Technology is constantly evolving and as cameras become more advanced, so will the storage solutions associated with them. The possibilities of what CFexpress™ can offer are exciting, and we’re looking forward to see what our cards will enable both photographers and videographers to capture.

Each CFexpress™ card has undergone extensive testing to ensure full functionality and performance in today’s high-end cinematic hosts, including ones from Canon (C500 Mark II & 1D X Mark III), Nikon (Z6 & Z7), and Panasonic (Lumix DC-S1 & S1R). Testing is currently ongoing in the Canon C300 Mark III & R5, as well as the Nikon D6. Data-intensive capture modes, such as Raw video, would require memory cards like CFexpress™ in order to guarantee continuous recording and safe storage. It is important to note though that CFexpress™ cards are not backwards compatible with either CompactFlash or CFast 2.0 hosts.

As a bonus, every CFexpress™ card is serialized, like your camera, and backed by Delkin’s “48-Hour Replacement Guarantee” policy for the ultimate coverage. Not offered anywhere else in the world, Delkin will replace any non-working CFexpress™ card within 48 hours or less (not including weekends), prior to receiving the non-working card. Cards can also be replaced over-the-counter at any authorized Delkin CFexpress™ reseller.

Delkin CFexpress™ Type-B memory cards have the most extensive capacity coverage, ranging from 64GB to 2TB, and are sold through authorized camera stores worldwide. For more information on Delkin CFexpress™ or other memory products, please visit www.delkindevices.com.

Via: The Digital Picture